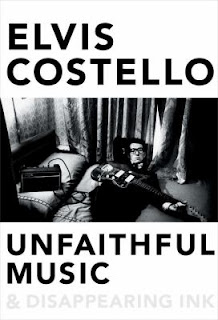 By Dwight Hunter
Perhaps, for people who were born after 1996, Elvis Costello is only a Rock and Roll Hall of Famer and the husband to jazz musician Diana Krall.  But Costello was a part of the punk rock wave in the 70s and early 80s with quirky, intelligent lyrics. As for me, it was the album, Armed Forces, I most identify with as Costello music.

In his memoir, Unfaithful Music & Disappearing Ink, Costello writes about life as a musician, about some of his song lyrics, and about his early childhood. The book is a new addition to KLIC.

As fate, would have it, Costello’s dad worked as a dance hall crooner for an orchestra and was a jazz enthusiast as was Costello’s mother. Costello recalled listening to his dad practice at home.  Jazz enthusiasm, it seems, played a heavy influence on Costello’s music. Maybe that’s why he played a Fender Jazzmaster guitar throughout his punk rock days?

Three things from this book worth considering. One, the effect of being a rock musician on marriage. Costello described his first marriage as filled with his unfaithful commitment, while his second marriage, despite lasting for 16 years, was barely even mentioned in the book.  In his current marriage, he found his soul partner in Krall.

Secondly, the moving part of the book was about his father battling Parkinson’s and dementia.

Then, third, there was the story about the song Alison – the dark song with an upbeat tempo. My aim is true is repeated at the end of the song. What was Costello writing about has long been open to various interpretations. In the book, Costello explained the lyrics as the beautiful face of a grocery store clerk, who he saw in a moment, her youth draining away as she checked out a can of beans and that less-than-honorable men would tell her lies to keep her trapped.  Wow – that’s powerful, but I wouldn’t expect anything less from an Elvis Costello lyric.

Throughout the book, Costello weaves good storytelling with smart self-assessment. Unfaithful Music & Disappearing Ink is available at KLIC. Find out about a rock hall of famer who has entertained many by his music and powerful lyrics.
Posted by Kolwyck Library at 2/04/2017 07:03:00 PM