Do we have any fans of AMC's show, The Walking Dead? The show just started its fourth season and has a dedicated following. But before it was a hit television show, it was a graphic novel created by Robert Kirkman. 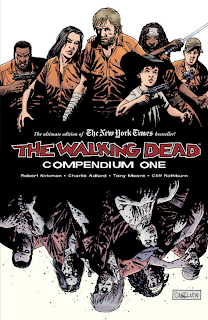 The Walking Dead: Compendium One covers the first eight chapters of the story; everything from the start of apocalypse up to the final battle with the Governor.

After suffering from a gunshot wound in the line of duty, policeman Rick Grimes wakes up to a deserted hospital. He’s stunned to find the undead roaming the streets. He makes his way to Atlanta in search of his family and is quickly surrounded by a mob of zombies. He’s rescued by another survivor, Glenn, and when he gets back to Glenn’s camp he finds his wife Lori and son Carl safe thanks to the help of his partner Shane. Despite this joyous reunion, Rick and Shane quickly begin to struggle over leadership of the group and their feelings for Lori. Increasingly erratic, Shane attempts to kill Rick. Carl saves his father and Rick takes over as the leader of the group. They decide to relocate farther away from the city, stumbling upon other survivors, abandoned neighborhoods, and even a beautiful farm. Sadly, they are always forced to move on, which is becoming a problem because Lori is pregnant.

When they discover a prison, Rick and his gang of survivors decide to stay. When you’re one of the last survivors of the zombie apocalypse, all those barriers make prison look like an oasis in the desert. They begin the arduous task of clearing out part of the cell blocks and turning the prison into a home. But despite the relative safety of the prison, the survivors start to crack under the stress of living each day like it may be their last. Rick starts to dole out justice to those who risk the safety of the group, but is soon removed from his leadership role because the rest of the group can't accept that they're living in a new world. As time goes on, the survivors begin to understand that they may have to take drastic measures to keep themselves safe from living in addition to the dead.

The prison is eventually discovered by a nearby group of survivors living in the fortified town of Woodbury. Rick is intrigued to find another group of survivors, but quickly learns that Woodbury is not what it seems. The town is run by a ruthless man called the Governor, who keeps his citizens placated by forcing strangers to fight in an arena and/or be fed to walkers. Rick, Michonne, and Glenn are captured by the Governor and tortured for the location of the prison.  This sparks a gruesome war between the two groups. As the attacks become deadlier and deadlier, readers learn who wins the prison, and who is left standing.