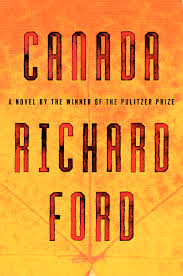 Dell Parsons leads an uneventful life. That is, until his parents decide to rob a bank. His parents are the unlikeliest of criminals, but Dell and his twin sister Berner never doubt that they're guilty. After their parents are taken away to prison, Dell and Berner are left to fend for themselves. Berner makes plans to run away with neighborhood hot shot, Rudy, but ends up making her way to California alone. Dell obeys their mother's command and waits. Eventually, he's whisked off by a family friend to Canada and taken in by Arthur Remlinger. Remlinger owns a hotel in the desolate Candadian town of Fort Royal. Dell is forced to fend for himself, living in a run down shack and helping host the hotel guests who've come to shoot wild geese. He's lonely and frightened, but is content when Remlinger begins to pay him attention. But his contentment doesn't last long. Remlinger wants something from him. Something Dell doesn't want to find out about. Will he be courageous like his sister Berner and strike out on his own? Or will he stick to his mother's plan no matter the consequences?