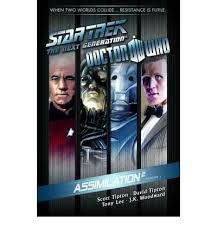 What's better than a nerdy read? A nerdy crossover read! Head over to the library today to check out Star Trek The Next Generation and Doctor Who: Assimilation² Volume 1 by Scott Tipton, David Tipton, Tony Lee, and J.K. Woodward.

The Doctor is master of time and space. He's the last Time Lord and he's lived for hundreds of years. But one thing he never gets right is landing the TARDIS (his spaceship, disguised as a police call box) in the time period he intends. This time he's mistakenly ended up in what appears to be 1940's San Francisco. His companions, Amy and Rory, are happy to be along for the ride. But the Doctor discovers something interesting in the little gin joint they wander into: an android. Enter the crew of the starship Enterprise, who just so happen to be testing out their newest updates to the holodeck. But after they "end program" the Doctor and his crew remain. Just when they're hoping to get to the bottom of this mystery, Captain Jean-Luc Picard gets word of a Borg attack. They are terrified to learn that the Borg have attacked a planet without warning and they aren't alone. The Doctor immediately recognizes their allies as the Cybermen. The two crews join forces to defeat their attackers, but the Doctor begins to realize that he's fought the Cybermen before in this universe. But last time he looked a little different, and the captain of the Enterprise was none other than James T. Kirk himself!