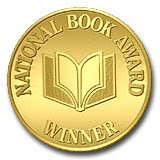 Attention! NBA Winners Have Been Named!


Aren't you excited? What do you mean, why is the library so interested in the National Basketball Association. Uh...let me start again.
The National Book Award winners have been revealed! You know, the NBA.
Since 1950 the National Book Foundation has celebrated the best of American literature by recognizing and nominating books in the categories of fiction, nonfiction, poetry, and young people's literature. The winning awards are given by writers to writers, which makes the recognition even more prized by those who receive it.

As their mission states, the "National Book Awards continues to recognize the best of American literature, raising the cultural appreciation of great writing in the country while advancing the careers of both established and emerging writers...."
This year's winners are:

Don't we all love awards and award shows? Aren't you excited for these writers? We knew you would be. We also thought you might be interested to know who some of the past winners were, so we created a display of previous winners that we have in our book collection. You may have read some of them, but if not, we know you will want to add lots of them to your "to-read" list. That list just gets longer and longer, doesn't it?

Tell you what, they're writin' 'em faster than we can buy 'em!