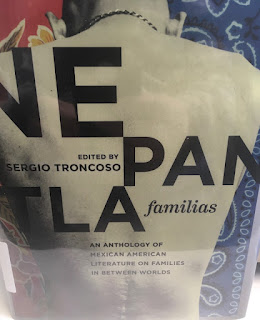 Nepantla familias: an anthology of Mexican American literature on families in between worlds
Review by Dwight Hunter

Neplantla, a Nahuatl word of living in the in-between space, is the focus of this anthology that brings together Mexican American narratives exploring living in between different worlds. This snapshot of cultural moments in various forms of delivery paints the contradictions in life as each person navigates important nuances of identity. Thirty writers are gathered to relate what it means to be an American, or more accurately, the feeling of not quite being accepted as a real American.  The narratives describe the in-between moments: traditional/contemporary; Spanish/English; transitioning between cultures. The writers battle different types borders such as the frustration of being "too Mexican" or "not Mexican enough."

The glimpse of Mexican American experiences found in this anthology collection is delivered in three forms: essays, short stories, and poetry.

The poem "Why you never get in a fight in elementary school" by Octivio Quintanilla begins with:

In this country,
everything about you is foreign
and no likes the look of scarcity.

The poem describes the realism and surrealism in such lines as "you are the fish and yet you are not the fish" and about sadness of fleeting memories from the old traditional homes and missing family only to be filled by the sounds of the new home.

Ruben Degollada's short story "Family unit" describes the suspicions of getting a place to stay on vacation while eyes peer around the car for extra people not on the reservation list.

Check out this 2021 published book from the Kolwyck Library:
Nepantla familias: an anthology of Mexican American literature on families in between worlds,
Sergio Troncoso, editor.
Call number: E184.M5 N35 2021
Posted by Kolwyck Library at 10/20/2021 11:08:00 AM