Book Review: Barack Before Obama: Life before the Presidency 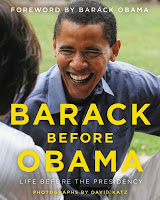 David Katz found himself in a car with Illinois state legislator Barack Obama. This starts the journey pictured in the book Barack Before Obama.

This online book from the KLIC Library Overdrive collection presents a stunning visual display of Barack Obama before he was president, before he was even US Senator. A volunteer campaign staffer in the early days of a primary election run for US Senate, David Katz was able to befriend the candidate, his advisers, and his family. The comfort level of all who were pictured is very telling. From the comfort of Sasha and Malia to Katz's camera, to capturing Obama in his favorite barbershop, and the capturing the rapt attention of VFW veterans gathering around then US Senate candidate Obama.

President Obama stated in his foreword for the book that he was grateful Katz was there to document his primary run for US Senate and beyond.

When Katz joined the Obama US Senate campaign, Obama was in third place for the Democratic primary election. This was in 2004. And 4 years later, Obama was elected president of the United States. Katz was there to document this appealing pictorial biography of the pre-presidential Barack Obama.

The quality of the pictures, the detailed captions for the pictures, and the story of the 2004 to 2008 time-frame for Barack Obama and his family makes this pictorial biography a book that can't be put down until the end.

This book is available online through the KLIC Library Overdrive collection.