Book Review: 100 Things Predators Fans should know & do before they die 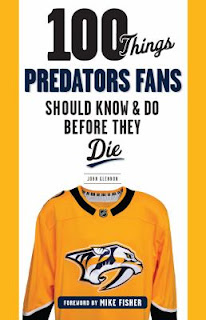 This book has a special appeal to me -- I am a Preds fanatic!

Having an NHL team just up the road in Nashville adds to the connection here of being a Preds fan. I was hooked on the NHL when I was in my late twenties and I attended my first NHL match. I was hooked ever since.

One thing about this book - it is written by a true professional writer - John Glennon. Glennon has covered Nashville sports for 20 years including 12 years as the Preds beat writer for the Tennessean. His knowledge and connections are what makes the book connect with anyone interested in the Preds.

Predators fans have attended a game at Bridgestone Arena, or watched the captivating games of the 2017 Stanley Cup. But only real fans can tell you the origins of the catfish toss or know the full story of how hockey first came to Music City. This book is the ultimate resource for the Smashville faithful. Glennon collected essential Preds knowledge and trivia and ranked them from 1 to 100. All Predators fans should read this! This book offered so many unique facts about the Preds and it was such a fun read!

For example, fact number 41. Check out the Fang that formed a logo

"One of the biggest skeletons in the Predators' history is on display for all to see. It's one that made its mark on the franchise well before the first Nashville skater took the ice. Predators fans interested in taking a look at the partial skeletal remains of Smilodon floridanus--the saber-toothed cat that inspired the team's logo, nickname, and Gnash mascot--can do so at the Bridgestone Arena's Fan Information Center, near the main entrance."


What about the saber-tooth cat? In 1971, the skeletal remains was unearthed during construction for what is now the UBS Tower at 4th Avenue and Union. A cave where the nine-inch long fang and cat skeleton was found was also discovered. A fan vote narrowed the choice down to the Predators and the logo is of a saber-tooth cat with a nine-inch fang.

Check out this new book from the KLIC library and learn about the Nashville Predators!