Book Review: Twenty-five Years among the Indians and Buffalo 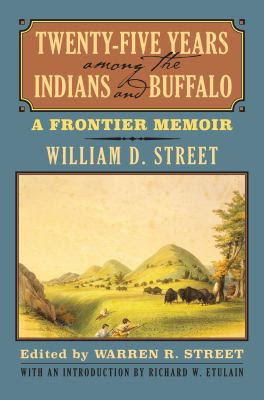 Sometimes, I will receive a inter-library loan of a book and go, hmm, perhaps a book to add to the KLIC collection.  Twenty-five Years among the Indians and the Buffalo was one of those books.

One of the first things I look for is seeing which libraries own a particular book. In this case, I was flabbergasted. The loaned book came from a private university in Alabama. Many of the Ivy League university libraries have this book. It became clear to me why as I began reading it.

This is a diary published into a book. And William Street became a newspaper editor after his years among the Indians and buffalo and I could tell it. The writing was crisp, detailed, and well-written prose. How often does one stumble across a book filled with first-hand eyewitness accounts of history about life after the Civil War to 1890 in frontier America?  This book does it because Mr. Street was a multipurpose career man. You name it; he probably had the experience. Let me list a few here: homesteader, military scout, town developer, cowboy, cavalry soldier, trapper, buffalo hunter, cattle trail hand, and much more. It is through all of these experiences during those 25 years before becoming a newspaper editor and a politician that William Street provides a glimpse into frontier America. I believe that is why so many academic libraries own the book in their collections.  And now, so does KLIC!

Street's early years on the American frontier were both ordinary and extraordinary; ordinary in what his prose revealed about everyday life of so many who went out west and extraordinary in their breadth and depth of historical event and impact. There was a notable shift in American life and culture during the transitional period of 1865-1890 and William Street was there and had the skillset to write about it with clarity.

I am going to point to one of the many details from this book that appealed to me in particular. This is about Hays, at the time of Street's visit, a village across the creek from Fort Hays. Fort Hays has its own history with Custer, and Hickok, and Cody all stationed there at one time or another. Today, Hays is a fairly large city in western Kansas and Fort Hays is a museum near Fort Hays State University.  But back then, in Street's visit, Hays was a less than desirable town to visit.

Mr. Street had served in the army, scouted among the plains, fought in battles, but his day of survival in Hays was an unforgettable experience. As Mr. Street succinctly wrote in his memoir, "for the one day's experience in Hays, I have never known equal."

To paraphrase his one day in Hays, I'll give you this short blurb. By the time Street made his only visit to Hays, the railroad was already 125 miles west near the Colorado border. But Hays was inhabited by people tired of following railroad west and decided to stay put, or as Mr. Street described, the worst of society. His morning in Hays started with two men shot in his presence and others shot or were carved up with a knife. After going outside onto the sidewalk, he was caught in a crossfire of bullets. In the afternoon, it was quiet as no one was killed or carved up, but as the evening came, two soldiers were killed, one with his throat carved and thrown into an empty rail car, and of course, other shootings and quarreling were going on throughout the night.