Machiavelli Goes to the Movies 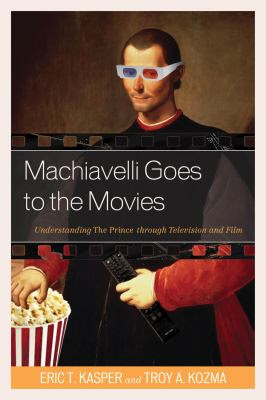 A review of the new library book -- Machiavelli Goes to the Movies: Understanding The Prince through Television and Film.  Review written by Dwight Hunter.

Machiavelli was a polarizing figure because of his book The Prince. The Prince was called a handbook for gangsters but also was called a pragmatic view of political realism.  Machiavelli wrote The Prince shortly after his departure as a diplomat in the early 1500s. The popular phrase - the end justifies the means - is attributed to Machiavelli in this book.

I learned so much about The Prince by visually seeing the movies I've watched in my mind as I read this book.

There is nothing more powerful than to connect a visual image of a political concept to popular culture.  Before continuing, there should be no surprise that I recommend reading this book - maybe even studying it as a book club read.

I'm not going to mention every chapter and every movie but here are some highlights.

Caress or Annihilate. Machiavelli instructs the prince that men can be caressed when taken over unless men want to injure you, then annihilate. One of the movie examples was The Godfather. Michael Corleone both greeted his gang with soothing caress but also with swift punishing blows.

People Accustomed to Freedom will Seek it Again. Machiavelli tells the ruler that if he occupies free people, the people must be wiped out or they will rise in rebellion in the name of liberty.  One of the movie examples was the 1984 version of Red Dawn. After a Soviet-Cuban invasion of the United States, a determined group of youth, the wolverines, rebelled against oppression and used guerrilla tactics to make commanding the seized territory difficult.

Bribery and Dirty Works. Machiavelli writes that a ruler must be despicable by using bribery, hiring others to do his dirty work, and creating a fall guy to gain the peoples' trust. One of the movie examples for this was Lincoln (2012) and how Lincoln secured passage of the 13th Amendment through the House of Representatives.  By using deception of a peace negotiation with the Confederacy and by using patronage to give jobs to lame duck Democrats, Lincoln secured enough votes to move the 13th Amendment onward for ratification - justified by the greater good of ending slavery. (The end justifies the means.)

Other movies mentioned in this book include the entire Harry Potter series (because of Snape), Argo, Da Vinci Code, All the King's Men, O Brother Where Art Thou, Braveheart, and many more.

After reading this book, I think viewing the listed movies will bring a new insight into Machiavellian philosophy.
Posted by Kolwyck Library at 9/20/2016 03:30:00 PM