The Museum of Extraordinary Things by Alice Hoffman 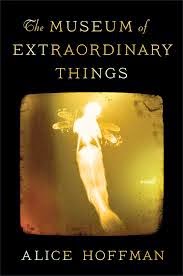 Alice Hoffman paints a vivid picture of turn of the century New York in her latest novel, The Museum of Extraordinary Things.

Coralie Sardie's father is a hard man to please and demands that she stay in peak physical condition, swimming in the brackish waters of New York. He also insists that she never remove her gloves. Her father is the curator of Coney Island's Museum of Extraordinary Things, and although he's never let Coralie visit the museum or socialize with the people on display, he has big plans for her future. On the eve of her 10th birthday, he shows Coralie the museum and her future display space. She's forced to remove her gloves, exposing her webbed fingers. In her tank she plays the part of human mermaid for the public and for private audiences. She is an obedient daughter until one day, when her nightly swim draws her far from home and she realizes that there may be more to living.

Ed Cohen is a talented photographer with a checkered past. He grew up in an Orthodox Jewish community, but abandoned the values of his father after joining up with a gang of boys hired to find hard to find people. As a young man, his talent for finding what is lost follows him outside his old neighborhood and into his new life. After a tragic fire in a textile mill, Mr. Weiss comes to Eddie requesting that he find his daughter. She wasn't at work the day of the fire and he needs to know what happened to her.

Eddie's search for Hannah and Coralie's search for life outside the walls of the museum draw the two together under tragic and horrific circumstances.
Posted by Kolwyck Library at 3/16/2015 12:00:00 PM