Angela Ditmar's Vibrant Art is on Display in the Library 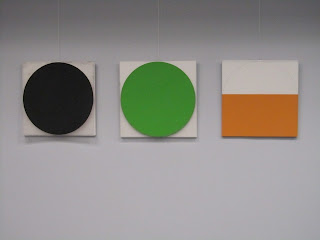 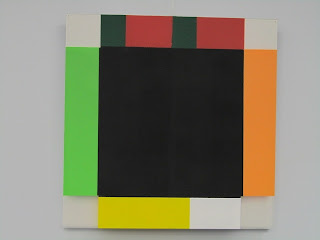 We are excited to be able to display a selection of works by local artist Angela Ditmar. The exhibit will be shown in the library through June 24.

This collection of works was inpired by Angela's visit to the Philipines.  She says, "The term “baranguay” is used to describe a division of land in a Filipino city. By definition it is the smallest unit of government in Filipino culture. As I visited various cities and rural areas of Luzon, the northern region of the Philippines, I was compelled to record an informal baranguay marking system....Each baranguay was coded by a color or color sequence, and on rare occasions, a symbol had been used. Each sequence was then painted on electrical poles and trees along the streets throughout each baranguay. This system, whether placed with intentions towards patronage and pride, invariably became a visual language, demarcating invisible boundaries and territories.

Competition, persuasion, balance, control and defiance are the behaviors that come to mind when something is territorial. I have discovered that these found color sequences combined with the compositional devices and the materiality of a painted field imitates some of these behaviors."

Angela received a Masters of Fine Arts degree in Studio Art from Hunter College, City University of New York, where she has been a guest instructor of graduate courses in Theory and Criticism. She earned her Bachelor of Fine Arts in Painting and Drawing from the University of Tennessee at Chattanooga. Angela is currently teaching foundation courses as an Adjunct Professor for the Department of Art at UTC, as well as working for the department as the Visual Resources Librarian.

We invite you to take some time out of your day and experience her remarkable interpretations of this element of Philipine culture.