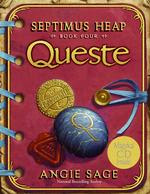 Fans of Harry Potter will be interested in this series of magical fantasy books that Lori Warren, Instructional Technology librarian, recommends.

Lori says, "I freely confess to having read every Harry Potter book and quite a few books on vampires, wizards, twisted fairytales, spies/secret agents, futuristic thrillers, and girly books.

Having confessed this, the book I just finished is the 4th in a series titled, Septimus Heap: Queste. The series centers on the main character, Septimus Heap. The books are by Angie Sage, an author that lives in a 15th century house in the west of England. This novel is not a modern tale of wizards and witches. These wizards and witches, dragons and ghosts live in an older time period. There is more darkness and more magic in every part of this world. The series centers around the seventh son of the seventh son of an ordinary wizard--a son that was switched at birth, lost to his family, and rediscovered in the first book. His sister Jenna is the youngest child and very unlike her siblings in that she has no magic power at all.

As the truth of Jenna's real identity becomes known, and as Septimus faces many cruel and darke things, you will learn the many secrets that exist in the castle, the ice tunnels, the Wendron Witch Coven, and the haunted inn. In this 4th book Septimus, his best friend Beetle, and the princess Jenna are tricked into taking on a queste by a darke ghost in league with a darke wizard's apprentice.

Learn more about Septimus Heap and his adventures at www.septimusheap.com."